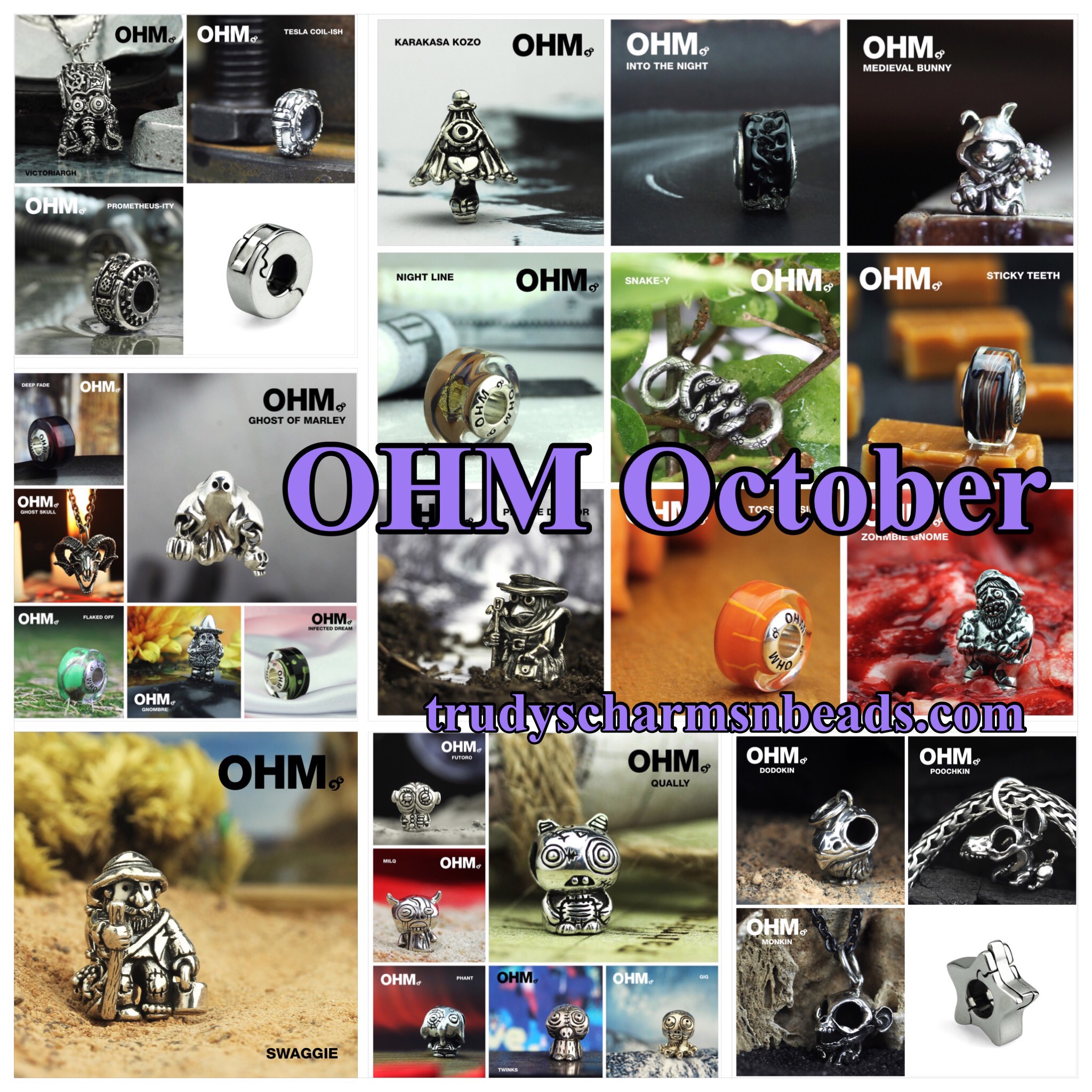 Summer is almost over and I can’t believe we are looking at the October release, another big one! Release date is October 1st. 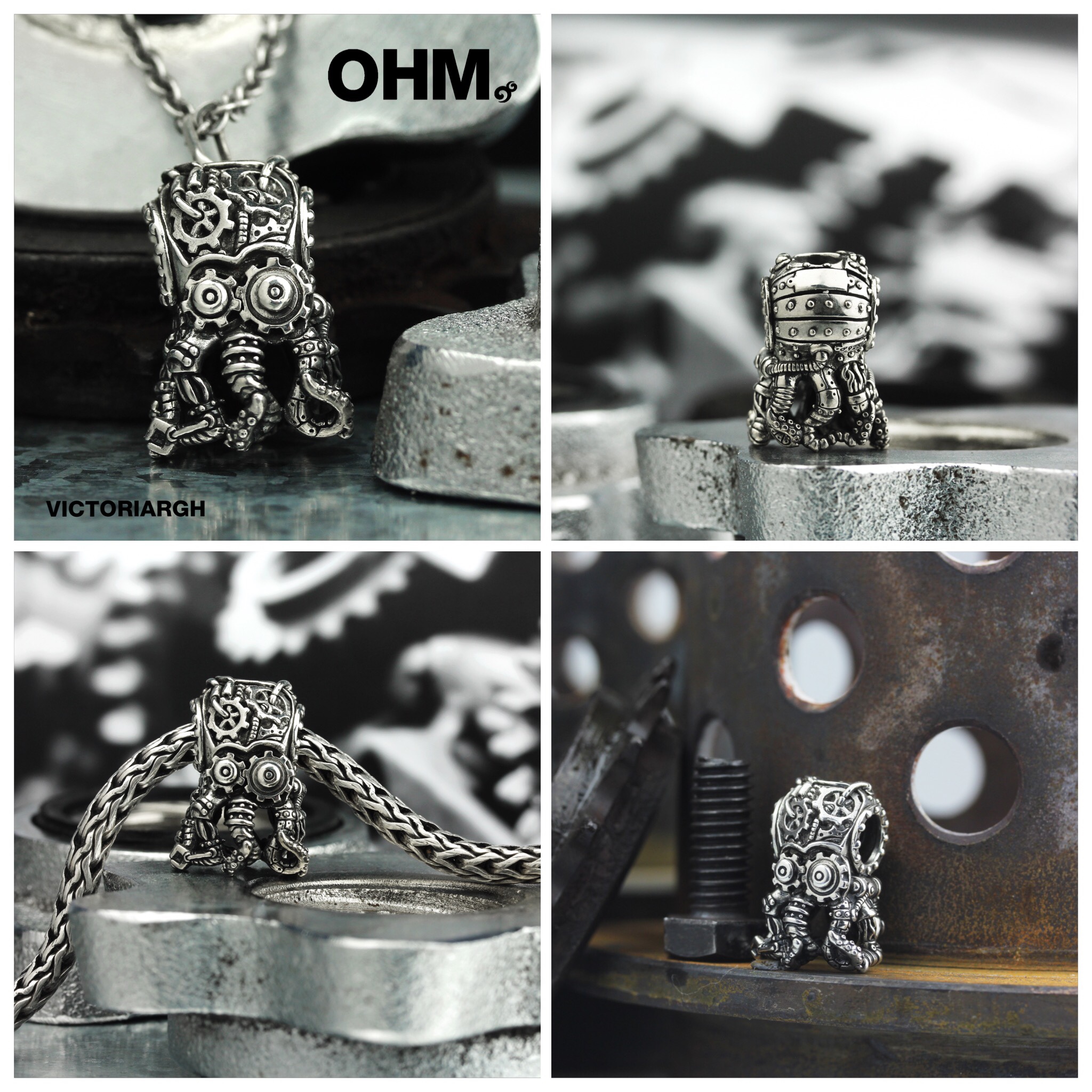 Finally OHM released locks for the Chunky bracelet! This is PROMETHEUS-ITY!

And a new stopper for OHM bangles called TESLA COIL-ISH. 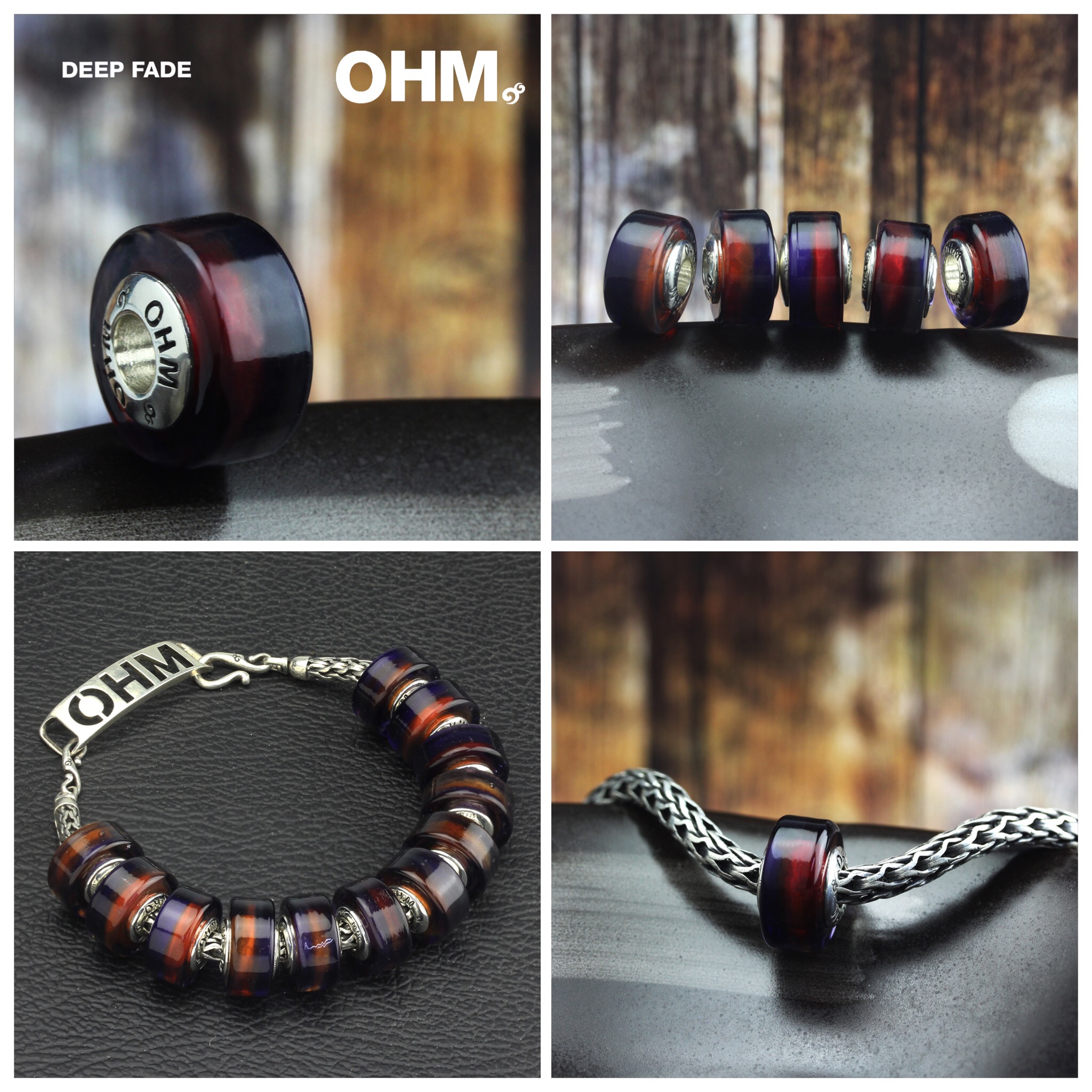 This beautiful green glass with gold and purple lines is Flaked Off.

OHM Gnome loves to party, here he is as GNOMBRE! 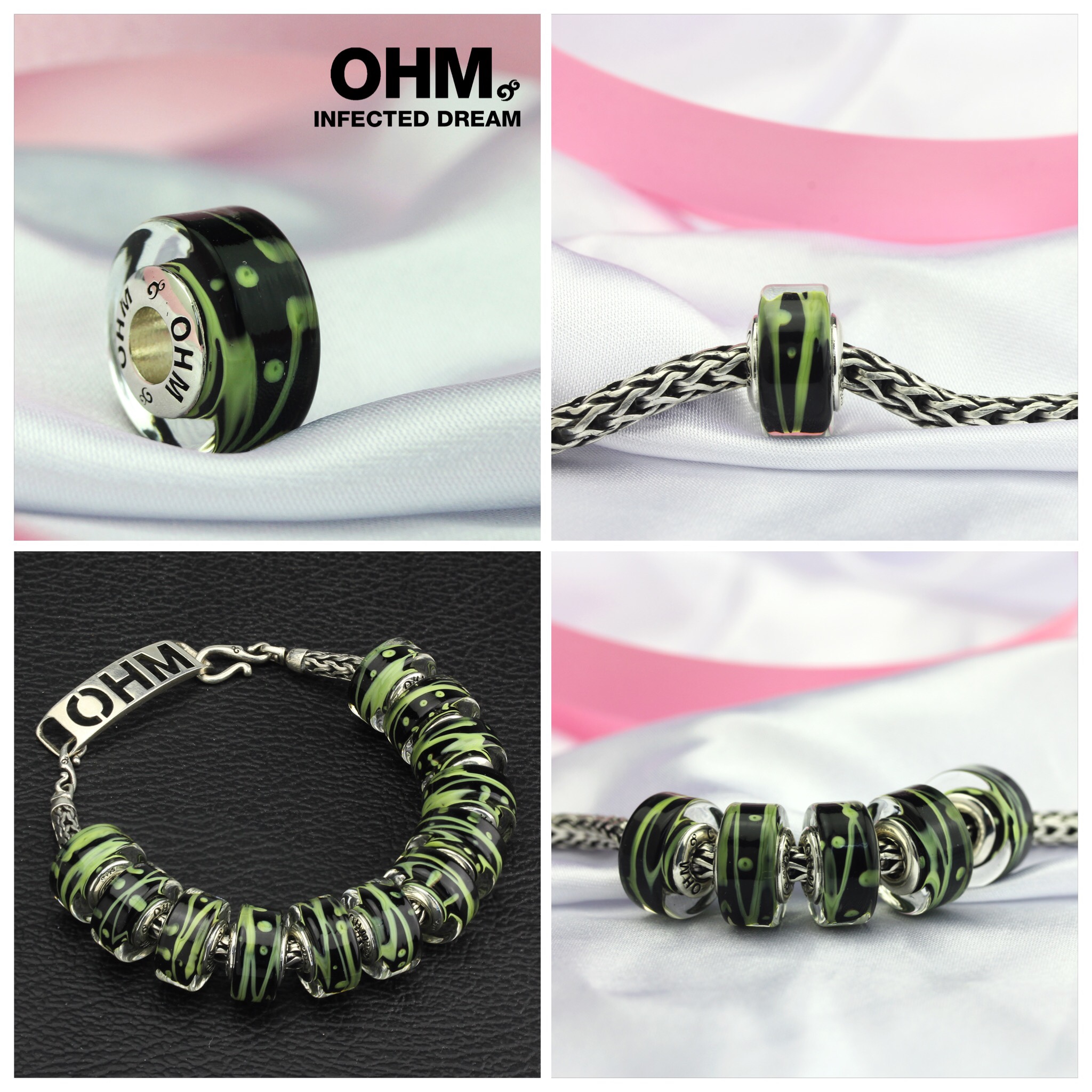 INFECTED DREAM is a beautiful black with green glass bead!

INTO THE NIGHT, a black glass bead with loads of texture!

This is a big surprise, MEDIEVAL BUNNY!

This is a gorgeous glass, orange with gold and purple called NIGHT LINE!

We all have been desperately waiting for PLAGUE DOCTOR! Another OHM Lab project assisted by Elizabeth Palmer. 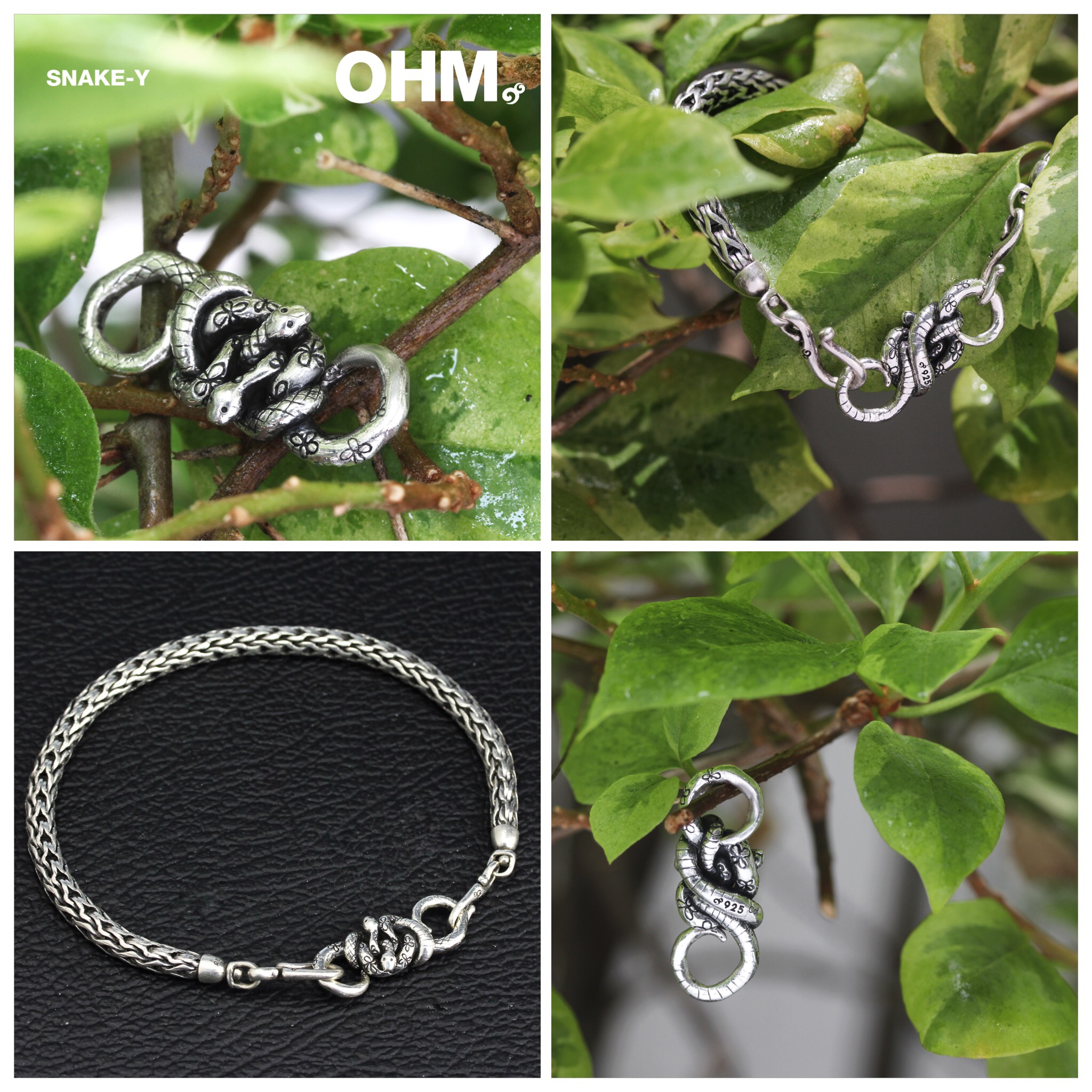 A new clasp for the Chunky bracelet, SNAKE-Y! 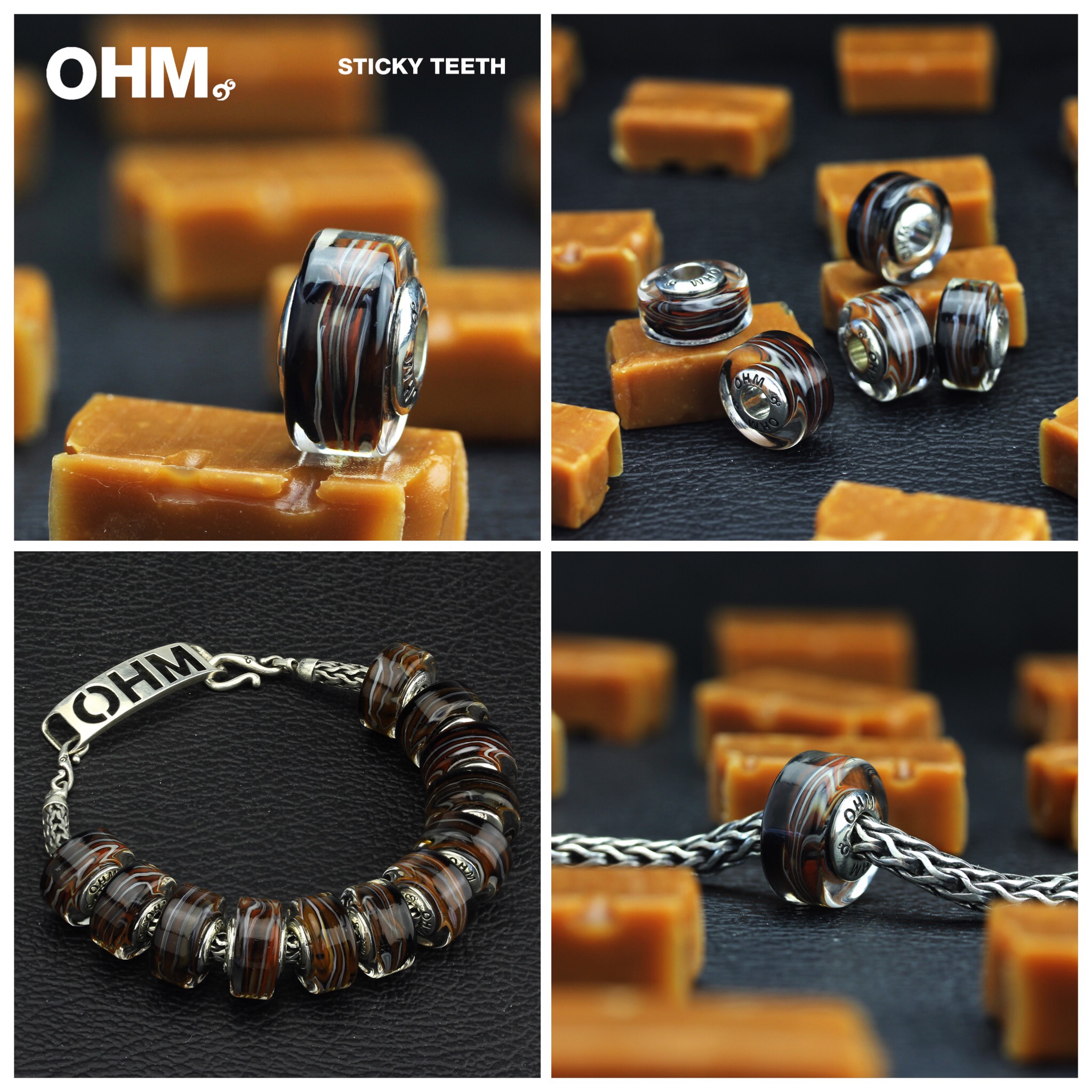 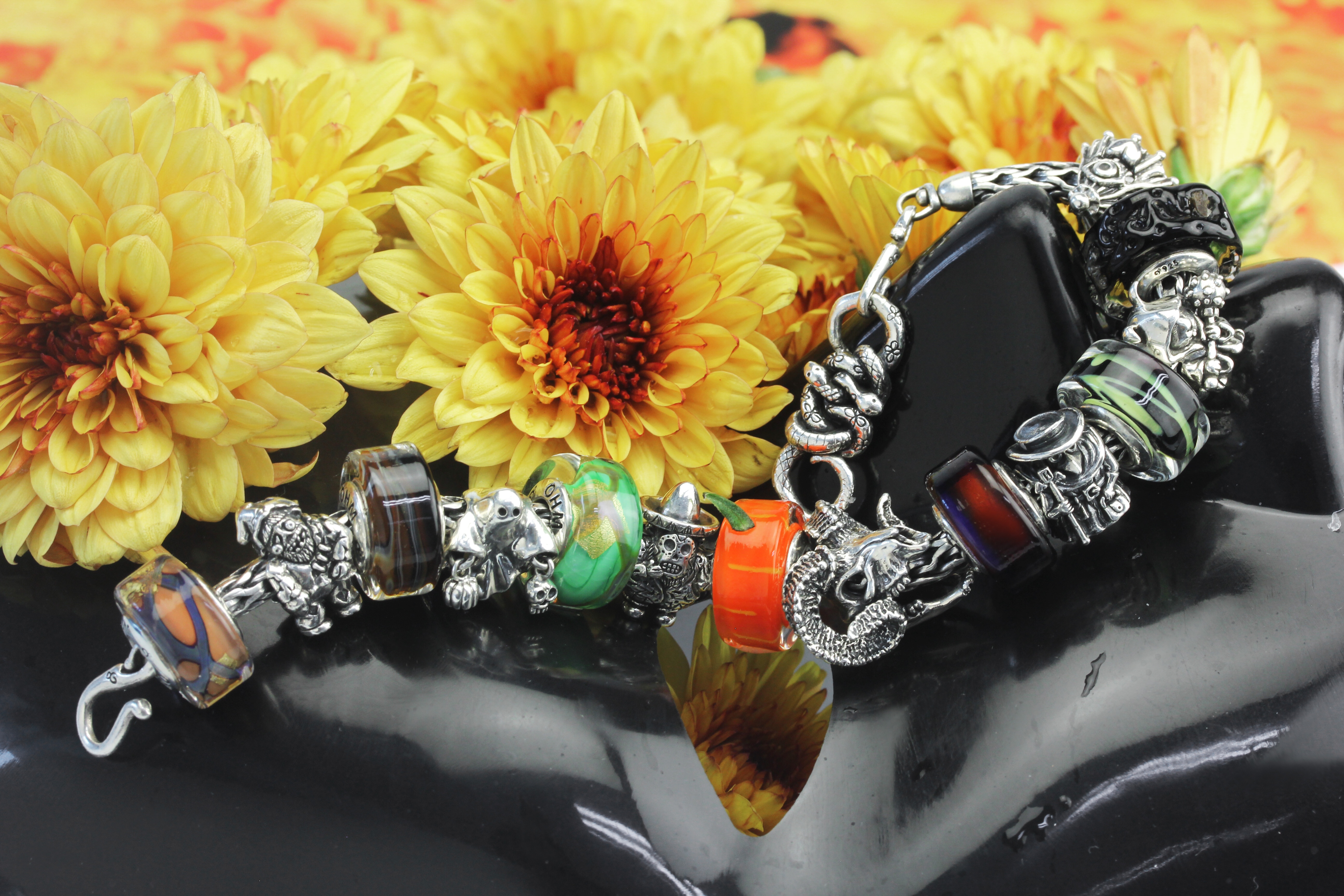 FUTORO. One of the most misunderstood Boogily’s , Futuro is a space alien that is believed to come from another universe. One of Futuoros specialties is being able to Lava surf and never get burnt! Futoro was at first disliked but so many until they realized how special Futoro truly is. 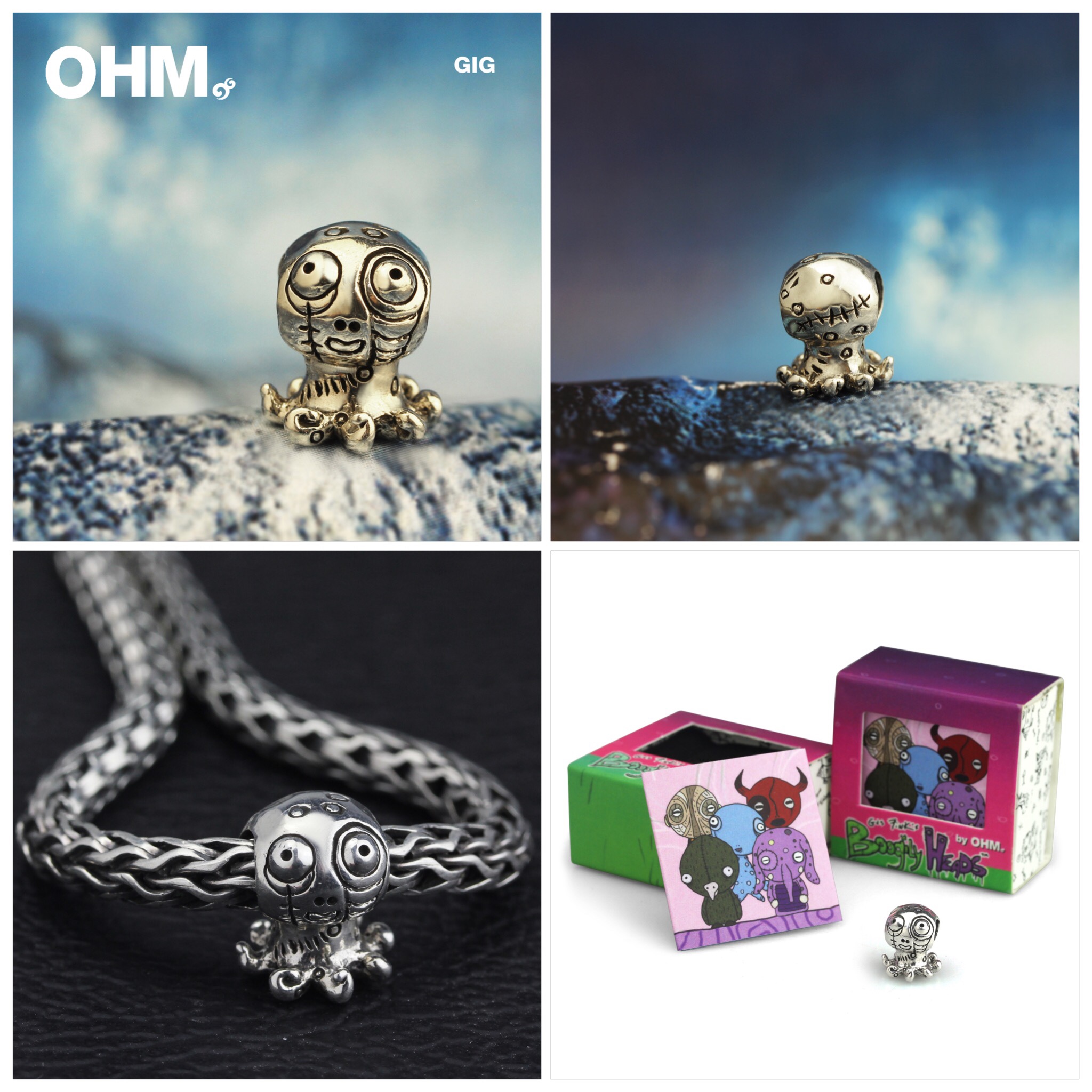 GIG. Silly and delightful Gig is the first aquatic Boogily. Gig is full of blissful happiness that she shares whenever there is someone in need of cheer. Gig didn’t have an easy life however. She saw the worst of times but through it all her story gives others hope! 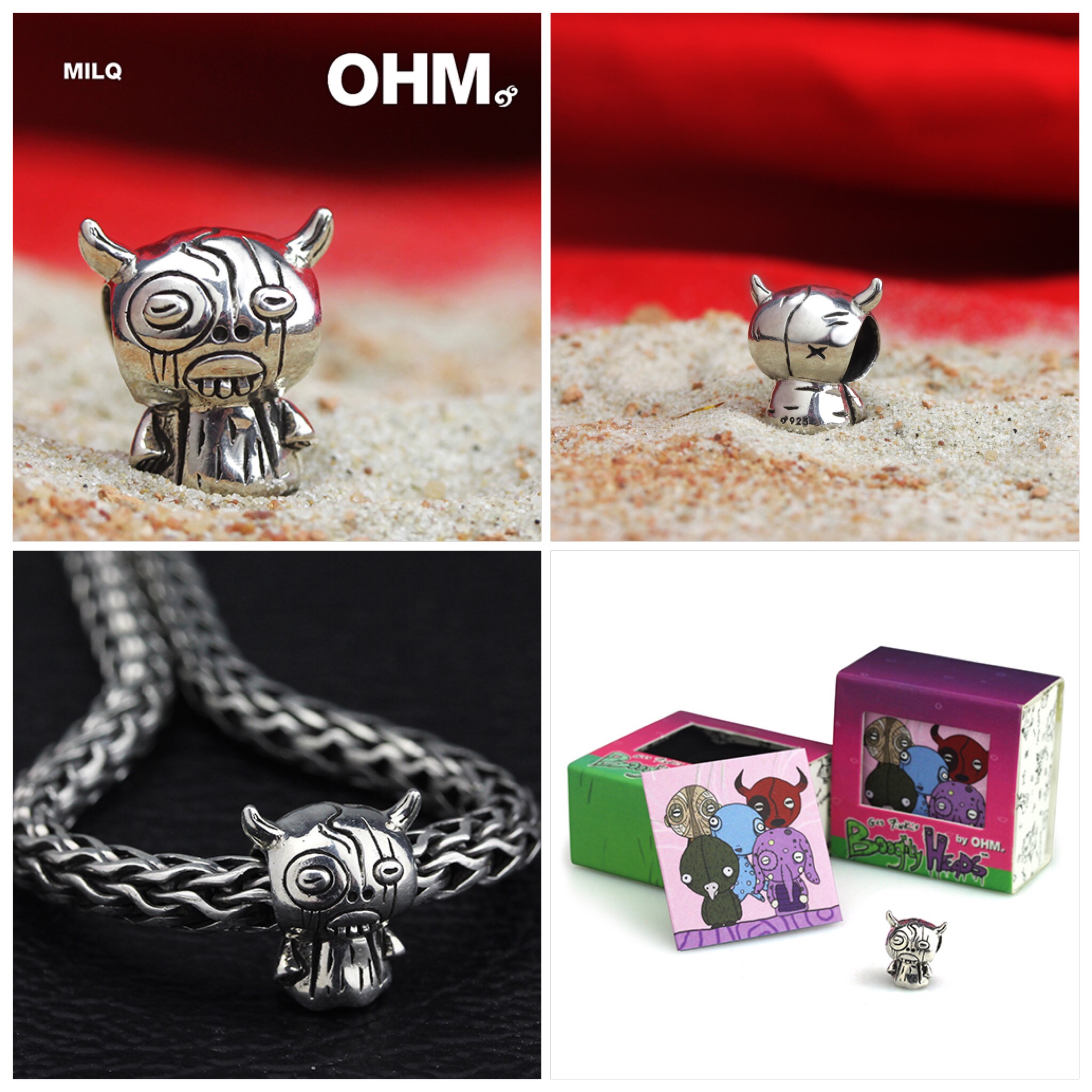 MILQ. Many thing Milq is a devil but little do they realize he’s just a red bull that looks devious.

He’s a good friend of Twinks and together they often know what’s really happening while others are just speculating.

PHANT. A performer at heart. Phant is a leader wherever Phant goes. If you’re not following Phant than you’re just going to watch Phant cheer on by with all the excitment of Phant that always comes with! Wondrous creatures always seem to be around Phant, it’s that special energy they seek and need to surround themselves with. Phant is full of those good vibes!

TWINKS. This Green Bird isn’t geat at flying and Twinks also isn’t very intelligent but the innocent energy Twinks brings on a daily basis is charming to all that get a chance to meet him. Twinks lives in a dumpster in Boogilyville where he awaits to notify any others whenver an emergency is at hand. Twinks would help anyone in need although he may not know what he’s doing he still has a pure heart 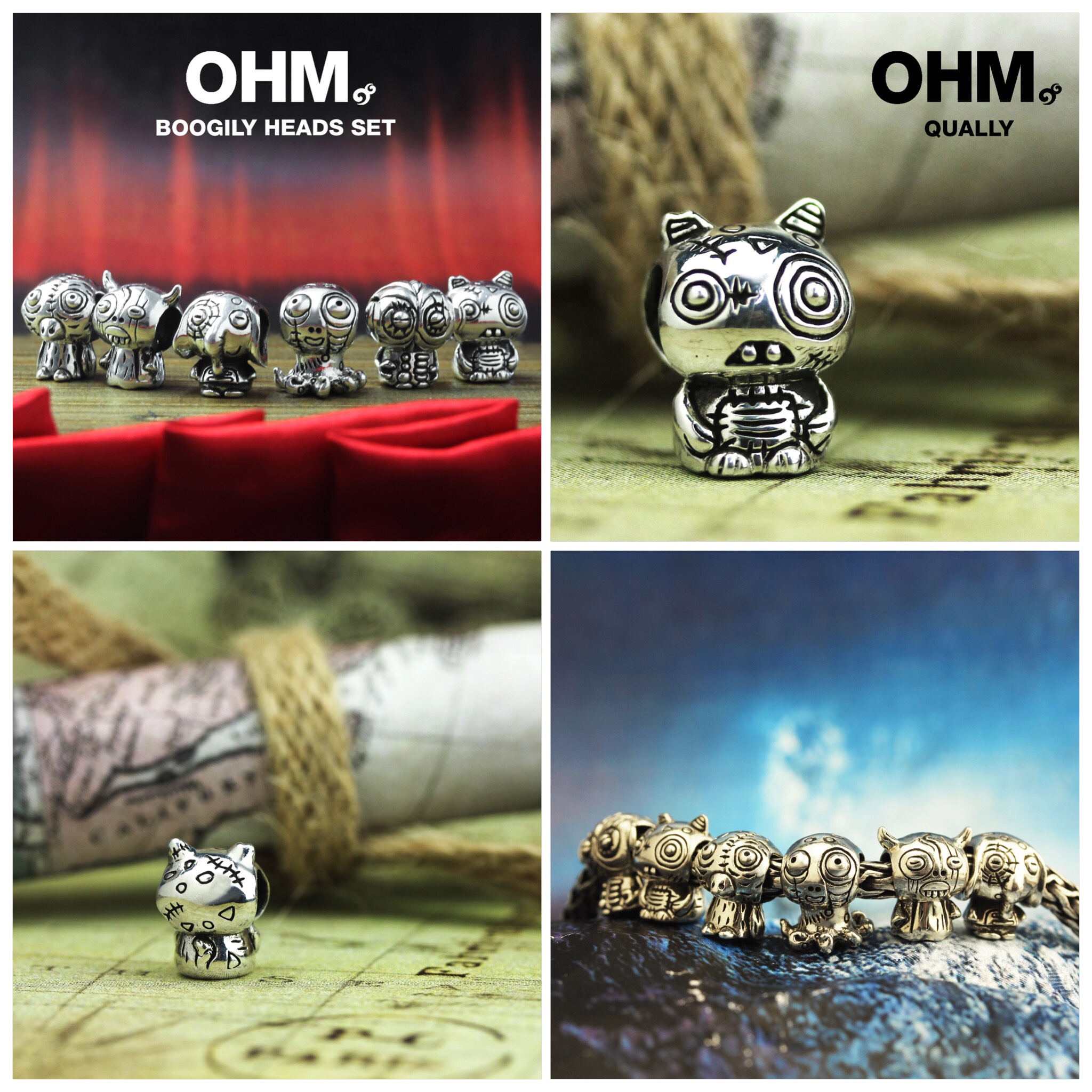 BOOGILY HEADS SET FT. QUALLY. ONLY AVAILABLE WHEN PURCHASING THE WHOLE SET! The mystical adventurer, Qually has been to the deepest caves and beyond. Qually doesn’t relax or work a normal job. He looks for where the day will take him and allows the journey to captivate his soul. Qually loves when other Boogily Heads need to find something or come with for an amazing quest lead by Qually!

This birdie skull is called DODOKIN!

And a doggie skull POOCHKIN.

Another new lock for the Chuncky bracelet is called BARE-ITY. 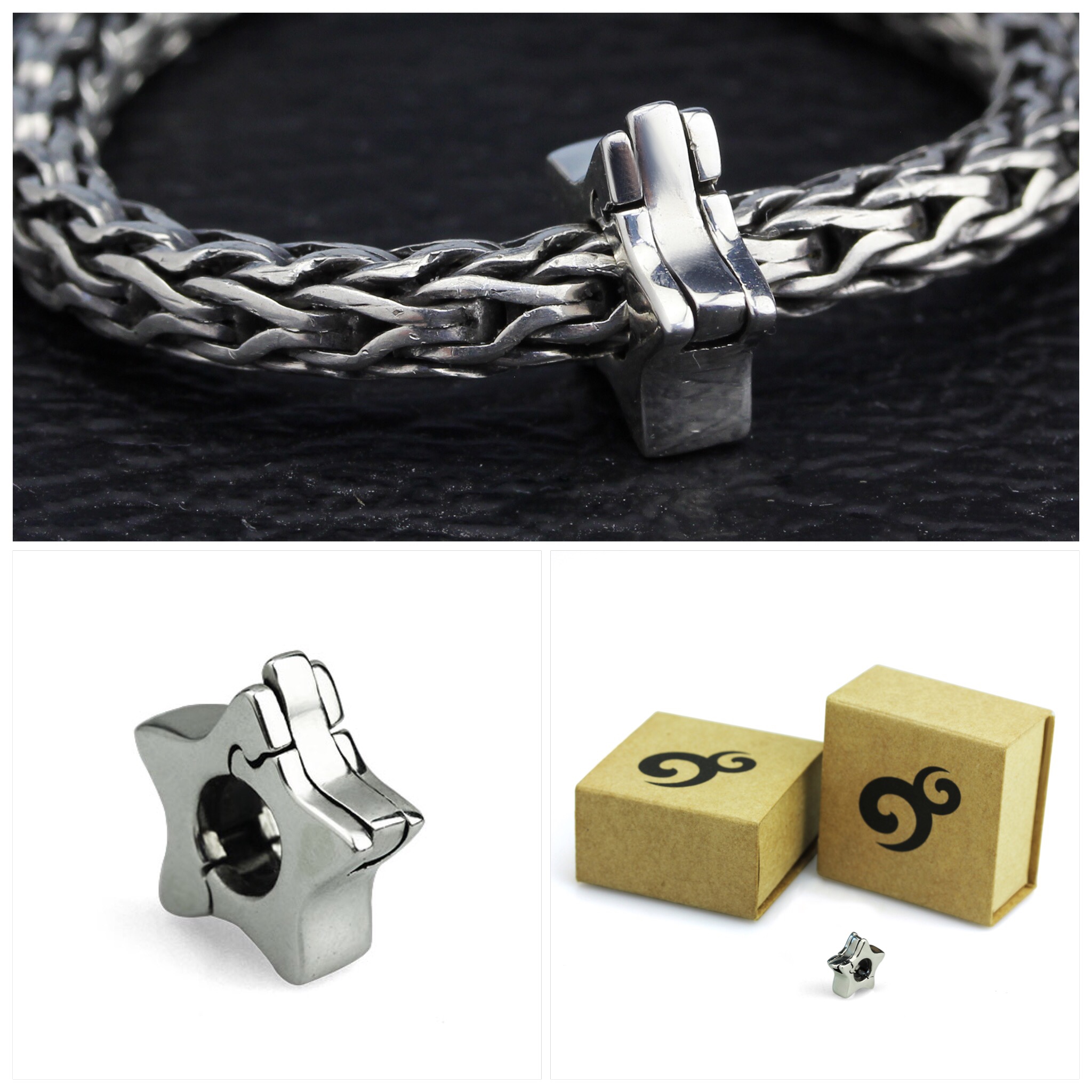 And this beautiful lock is STAR-ITY.

SWAGGIE .Every Australian knows and loves the bush ballad “Waltzing Matilda” and sings it enthusiastically as an unofficial national anthem. But for the uninitiated, here is a quick translation of the tragic but courageous story.

A swagman an itinerant farm worker — often with a specialty skill set such as a sheep shearer — who walked from place to place looking for the next job. They carried all their possessions with them: a frying pan, a tucker bag to carry food, a billycan for boiling water, and a bedroll and spare clothes rolled up in a bundle called their “swag.”

This journey on foot to seek employment was called waltzing and sometimes the swagman would facetiously refer to his bedroll as his “Matilda” or his wife, girlfriend, companion.

One day, a swagman was camped by a river bend called a billabong waiting for the water in his billy to boil for tea. Suddenly, out jumped a jumbuck — or sheep — and the swagman thought of lamb chops! He seized the jumbuck and stuffed it into his large tucker bag for a tasty supper later.

Sadly, however, the sheep’s owner arrived with several mounted policemen and accused the swagman of theft. The gutsy swagman declared that he wouldn’t be taken alive and jumped into the billabong.

Did he get away? Probably not; indeed, the song suggests he drowned. You can still hear his ghost haunting the billabong and singing “Watzing Matilda” on the wind.

Australians admire the fierce independence of the swagman to live free on the open road and to die rather than surrender. We call our feisty little Ohm swagman “SWAGGIE” and we think you’ll enjoy his independent spirit — and adorable details — on your bracelet whether you’re an Aussie or not!

And there they all are, what a faboulous release with lots of new and stunning designs! My wishlist is going through the roof, how about yours?